First Natural Snow of the Season! 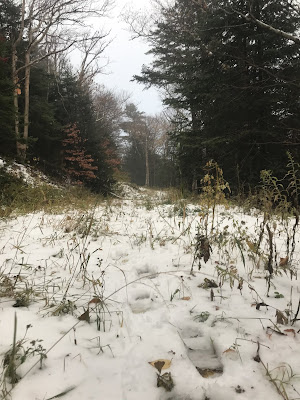 It was pouring rain when I started.  I felt silly, pulling into the K-1 parking lot, all kinds of construction materials and machinery strewn around in some organized chaos.  Hoping that I parked in a safe space that wouldn’t piss off any of the hard working construction crew, I pulled my rain hood tightly over my head and began the trudge up the mountain. 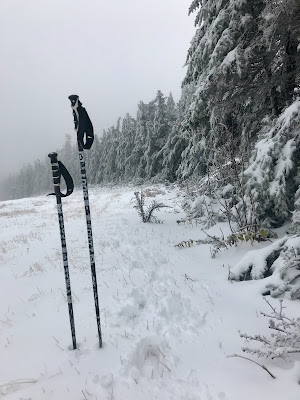 As to what I would be skiing on, I really wasn’t that confident there was much left.  The snow had fallen yesterday afternoon, but I was working on a project in the office and just couldn’t make it work before darkness fell.  And as much I enjoying hiking in the dark, early season skiing in the dark is not safe.  Early season skiing is dangerous enough.  No need to add limited visibility. 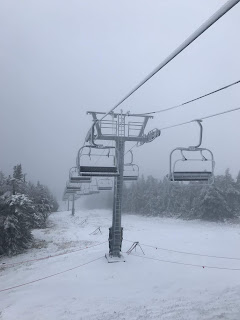 And so up I trudged, turtling into my rainshell because only in the fall does 38 degrees feel like you can freeze to death.  Today, I chose Bunny Buster and up Racer’s Edge, meandering across the race trail and past several down trees.  The further I walked, the more snow patches littered the ground until finally each step was either in grassy water or beautiful fresh snow.  I loved it!  This late in the season it felt like a miracle to be walking on snow at all!  And the best part about ascending is that the higher you go, the more snow you find. 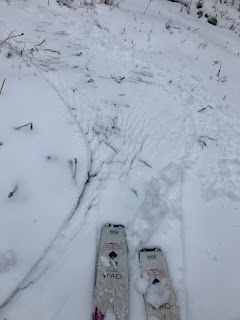 And more snow there was!  I still use my trusty measurement device - one pole goes as far as it goes and the other stays on top.  Around 4 inches in most places, but thicker at some spots - and those were the spots that I wanted to ski.  But I still wasn’t sure.  So I had to go check out how the new North Ridge Quad looked with all kinds of natural snow.  She sure did look pretty ... but then I was confused because the guns weren’t going.  I didn’t understand ... why was there natural snow but no men up there making it? 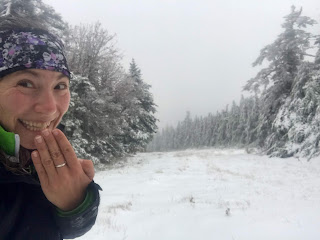 That’s okay - I wasn’t up there to ski manmade snow anyways.  I wanted me some real stuff.  And real stuff there was!  SO much of it that you were above the grass and counted actually make actual smooth turns.  No precision turns, no stepping wedges, no emergency ski off the side of the trail.  I was so excited that I was giggling as I went to put my skis on ... and then I paused and focused on my breathing.  This was not the time to get excited.  You need to be calm, focused and celebrate after you make it down safely.  No stupid decisions.  It’s my mantra for early season skiing.  It has to be.  One wrong turn and your whole season is over. 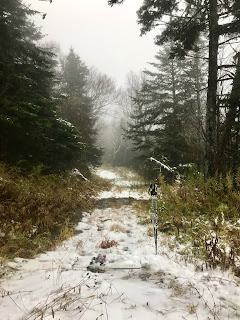 But today, on this morning - I was right on point!  West Glade Top to Bottom all the way back to Racer’s Edge!  Sure, there were some sketchy parts on the road, but the turns!  They were beautiful and fun and just oh so wonderful.  Makes you forget all about the uphill trudge as you’re practically skipping your way down the rest of the mountain.  Damn.  I love starting my mornings off right!