Day One? September Skiing in Vermont: the First Frost makes for Fast Grass 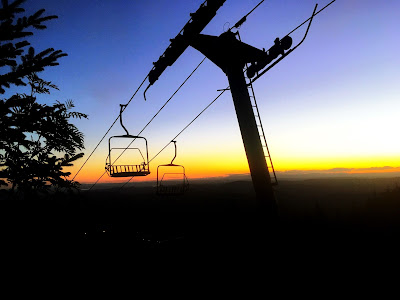 It's been just over three months since I last felt my skis beneath my
feet. I'll admit, my ski clothes are still hanging on the hook right next to my closet. They haven't moved from the last time I wore them. My jacket and uphill pants are waiting. My skis sit silently, ready and willing for the moment when they will once again play in the snow.

For me, September is always the hardest month of the year. The air has changed but snow & skiing still seem like forever away. It's the last month where we don't get to ski, but the first month of pure torture. I check the weather in constant anticipation of the first frost, in hopes that will calm my soul. But it never does, instead making all my pre-season jitters worse.  I mountain bike, I paddle, I trail run and spend countless hours in my garden ... and they are all just endless quests for the feeling for that I most long ... 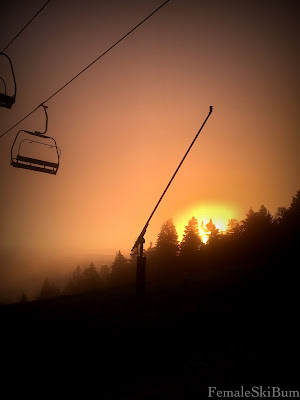 Winter.
I spend my whole year
waiting for the air to get cold enough,
for the ground to freeze
and for the snow to fall.
Waiting for Winter.

Until this year.
I just couldn't take it anymore.

So much is violently changing in my life and I needed the release that only my connection with the mountain can calm. I seriously could not take it anymore.  Its only been three months, but my feet needed to move, one step at a time, bogged down by the weight of my ski boots but still swinging forward; my mind needed to get lost in the movement of upward travel in anticipation of the promise of pure unadulterated freedom on the way down.  I know, I realize that I sound unbelievably crazy, but I desperately needed the calm that only the feel of my skis gliding can bring me.


As Sunday River tested her snow guns and the weatherman predicted the first frost at high elevations across Vermont - I made the call. I would go. In my mind, if I could ski rocky pitch of lower Superstar in the late spring mud, then I could make something out of the fast grass on Rime. Plus, I had never skied Killington (or anyplace) in either September or August. For every factual argument against this ridiculous adventure, I could counter with great fortitude.  We all know the risk of early season skiing, where the over enthusiasm for the return of winter leads to over zealous gaper decisions.  I felt so utterly stupid, crazy and acknowledged these potential dangers, the least of which was ending my ski season due to injury before it had even begun. 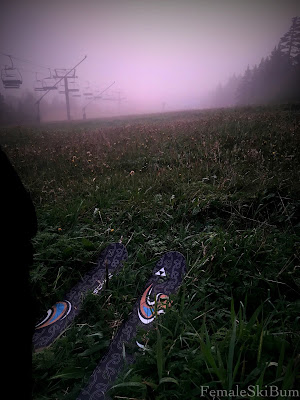 But I would let my mind could contemplate those thoughts.

I needed to ski.
Badly.

And so I went, starting my journey up the mountain at 5:15am, as the bright crescent moon led the way under a wonderfully cold and clear star lit sky. I prayed to the ski gods that the grass would be short and frosty enough to let this whole ridiculous adventure be worth the effort of hiking Killington with ski boots on my feet and skis strapped to my back. The sun rose just as slowly as I did, my body obviously not ready for the added weight as I made the first ascent of the season. I hiked the ancient path I had walked so many times before, crossing the newly trodden paths of Spartan Racers, as my eyes searching for any sign of frost. There wasn't much.

I began slowly to worry that this might be the stupidest thing I have ever done.

Oh my god, it so totally and absolutely wasn't.  It was amazing, wonderful, ridiculous and the most fun my soul has had in months. From the moment I dropped my skis onto what was more like small bushes than grass, I knew everything was going to be all right with the world. As I shuffled my feet to get a feel for the plush surface beneath, I began to glide. Not quickly by any means, but gliding. Moving faster and faster down the hill until a sound a hadn't heard in months snuck out of my lungs ... Woohoo! I found myself crying aloud as I headed down Upper Double Dipper. 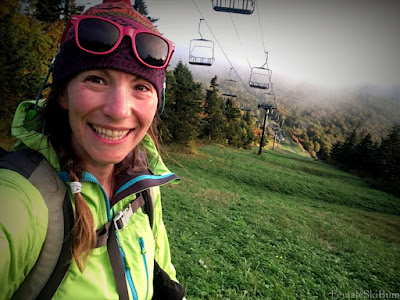 I was skiing!!
at Killington!!
In Vermont!!
In September!!

Turning ended up being not such a good idea, but the glide was all I needed. Over and over again, I would angle my skis to catch enough speed to glide but not enough to lose control of my bindings or ski tip got caught in a bush. It went on this way to the bottom of Rime, the joy of feeling my skis completely overtaking any horribleness that life might have in store. I felt like the Grinch on Christmas morning -- I didn't need fancy packages or snow, all I needed was the feeling of the glissé and my love of skiing. 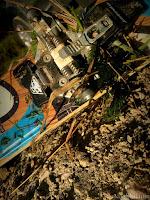 My skis were safe and clean with no core shots. My knees and all my body parts came out unscathed - although my upper quads were screaming by the end of the run. My boots looked just as beat to shit as they do all late spring and my aching feet were screaming from the walk down. My poor little Dynafit bindings took the worst of the fast grass, but even they held up perfectly.

My smile - that powder day kind of smile that sticks with you all day? The one where you giggle for no reason, except that there is so much joy inside you that oh have to let just a little of it out at a time so as not to scare people? Yay, that smile was there.


Most importantly of all, my soul, my spirit, my energy, was finally free - free to glide and intertwine with the spirit of the mountain, lifting higher than it had been in months.

I was at peace. 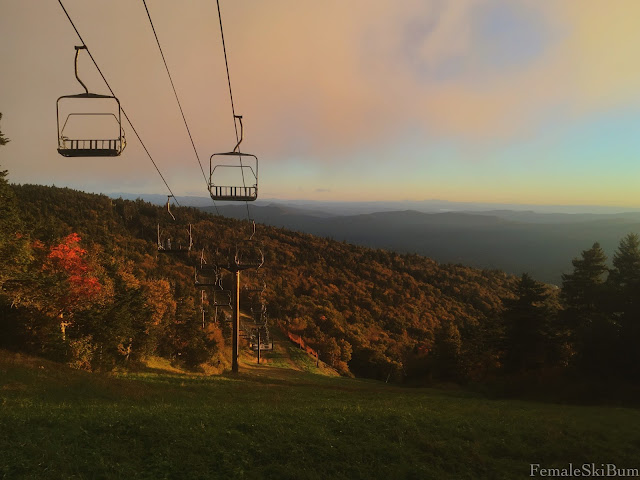 "My skis are the things,
That give me my wings
And make me an eagle and fly."

-Bob Gibson, In This White World

May You Find the Spirit of the Mountains Within You.
FemaleSkiBum