We made it to Tuckerman Ravine this year!

That's all I could think about as we hiked up the work road style trail with all our backcountry ski and camping gear strapped to our backs.  It's a long slog up the first part of the Tuckerman Ravine Trail, but made even longer when the rubber on the YakTracks that I found lying on the trail out to Pico Pond several years ago finally decide they were going to snap.  So after hobbling up the icy sections for a while, the Boyfriend rigged the first, then the second and finally a third snap back together with the binding force of the universe: duct tape.  Our oaks weighed less than 50 pounds, but after virtually no skinning this past winter, my body felt completely out of shape.  Did this feel like the worst ascent ever?  Yes.  Did the boyfriend break his ascent record?  Yes.  And I say yes with a huge smile, after more than six years leaving with a traumatic brain injury, having him lead the ascent was a ginormous success!

But the real excitement, especially in this dirth of a snowfall year, was that there was enough natural snow for us to try and ski the ravine in the first place.  Since our own resort of Killington relied so heavily on snowmaking after receiving less than half of their worst snowfall record ever, we were extremely worried.  But - low and behold - we would not have to miss a ski season at Tuckerman Ravine.  Even if the entire right side was closed due to the dangers of falling ice and undermined snow, we would still get to experience the White Mountains and the mecca that is Tux.

So how much snow was there, really?  Well, I like to judge by the amount of snow surrounding the water pump at Hermit Lake.  Growing up playing with the pump at my camp, I find a strange peacefulness in having to pump the water through iron pipes and into my Nalgene.  Most years, the pump sits at the bottom of a 3-4 foot dug out hole.  This year: nothing.  There was a base, but instead of feet it was mere inches.  I could have filled an entire roll of film just comparing snow depths.  The cairn leading to the shelter was completely exposed, yet there was still frozen water on Hermit Lake itself.  While the summit had been free of snow for weeks before we arrived, we awoke our first morning to snow at the Chocolate Factory (our nickname for the summit towers).  As we ascended up the practically snowless entrance to Hillmans Highway, it was a lovely contrast to see the snow covered summit.


But we were there, not to gawk at the snow, but to ski it.  And so we did.  Extremely carefully.  With so much undermined and rotting snow, it was essential to hike up the trail you were going to ski down in order to study what was around you.  And so, our ascent up Hillmans was filled with comments back and forth about this waterfall peeking through and that waterfall not quite showing yet, so lets not try and go that way on the descent kind of thing.  Luckily for us, one of the caretakers also decided to ski Hilllmans that morning, so we chose the safest descent route: hers.  It was definitely not one smooth run filled with whoops and hollers.  It was a pick your way, stay close but not too close, manipulative ascent.  The only goal was to ski safely.  It was an exhausting, mental exercise, but a successful one.  I was grateful for all the mountaineering we have done and the knowledge we have gained, but it also made us aware of how small we are in the real world.  The east coast might be small, but it packs a mighty punch. 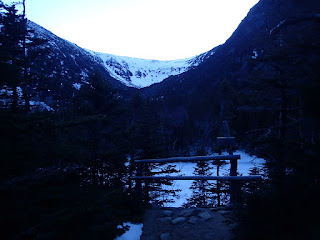 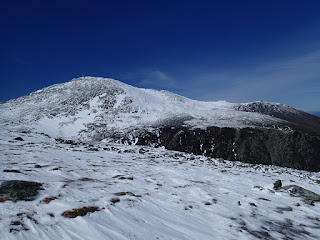 I know this, because I forgot my big puffy jacket.  And I was freezing both nights.  Like hypothermic freezing.  Each night, as I was practically in tears from the cold, we discussed going down to the car and giving up on our Tuckerman Ravine experience this year.  It was a conversation we needed to have, but I would have stayed up all night doing jumping jacks and burpees if it meant we could stay.  Wonderfully, the boyfriend loaned me his extra warm puffy coat for the night and we snuggled to stay warm. There are indeed advantages of winter camping with your spouse.  It was yet another reminder to me that it is the simple act of consciousness in our activities and lives that make the small differences.  If we had paid close attention on Hillmans, we could have ended up downstream under the snow.  And I can bet you that I will never again forget my big puffy coat.  Watch me be extra cautious now and pack that coat for 50 degree nights canoe camping this summer.  Especially in the life and death situations of winter camping, attentiveness to the small details will have the biggest effect on the success of your mission.

We spent the remainder of the trip enjoying the mountains, spending our first nights - of what will hopefully be at least 31 - outside for the year and playing in the bowl partially filled with snow.  There is something to be said for just taking some time to sit in the ravine and soak in the entire experience.  We watched the ski-mo crew run laps around the young boy without crampons struggling to make his first ascent ever up Left Gully, while the mom tried to avoid the creepy guys while she waited for her husband and daughter to make a second run without her.  Killington Mountain School showed up with the entire school.  And then there was us, quietly ascending and descending, just celebrating another wonderful ski season spent in the mountains. 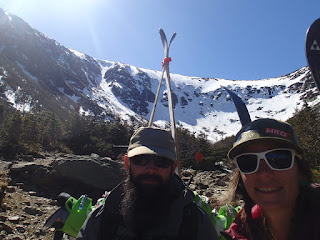 May You Find the Spirit of the Mountains Within You,
Merisa