Thoughts from the Walkway 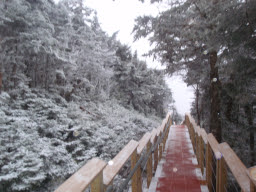 Ahhh, the dreaded walkway.  Killington has a video meme with someone walking a stair machine in full gear with their skis thrown over their shoulder.  It has been called the Stairway to Heaven, a combination never ending song used when disc jockeys need to use the restroom and the trail which lost its existence for the Walkway's creation.  Backpacks litter the top of the North Ridge as people bring sneakers with which to walk out.  There is talk of sponges to cushion the shoulders and packs for ski carrying.  And then there are those who convince others to carry their skis for them ...

To me, the walkway is something different.

The Walkway is where I give thanks.

After the first quick ascent where everyone can see you, I take a deep breathe let my legs get lost in the rhythm.  I keep my eye on the walkway, making sure not to lose a toe stuck underneath the grate and rip my pants.  Or how no matter what I do, I always seem to be stepping up with the same damn leg ...

After a while, my eyes begin to look upward and outward, out across the greenish-brownish mountains of post-foliage Vermont.  So beautiful, are these rolling mountains, a luscious valley of just pure awesomeness, but kinda sad and depressing looking during twig season with all their beautiful colors fallen off.

Then I look the left, toward the North Ridge of Killington and see nothing depressing at all.  In fact, I see the only real amount of snow until I look way out at Mt Washington across the way in New Hampshire.  And I laugh.  Almost every time.  I laugh because I got to ski today, even amidst the depressing brown of twig season.

And then I thank the Walkway.  And I thank Heavenly Traverse.  I shake my head at how awesome this walkway, for which was sacrificed one of my favorite adventure trails, has become a most prized possession.  Without the Walkway, where would we ski?  With the K-Chair far far gone away, the North Ridge has become a playground.  Our small little mountain, where we are all stuck together until the Walkway is retired for the season.

I thank the guys who made the walkway, the poor kid who has to shovel the walkway, the park crew who has to walk against the flow every morning as they leave the trails for breakfast.  I thank the ski patrol, who has to figure out a way to get us around the walkway within the golden hour.  I thank the lifties and electricians and mechanics and groomers and snowmakers for making a dream world in for us to play.  I thank my dad, for introducing me to Killington and instilling within me an unboundless love of skiing as much as possible.  I thank the boyfriend for letting me drag him out skiing everyday.

And I thank Killington, for putting up with all of us crazy east coast skiers who will ski anything if you let us.

It's a land of magic, a place full of a uniqueness all its own.  A place like no where else on the East Coast, where life if about one thing and one thing only.  A time where we all come together, under one chair, to celebrate a sport and a way of life in which we all believe.  A moment where nothing else matters except the feel of the snow under your feet and the wind in your face as you once again are blessed enough to ski.

Oh, and your game better be on it because its K-Town and everyone is watching.

We are skiing in October and November.
And for that, I use the hike out to thank the Walkway.