on April 26, 2012
With snow showers on and off for the twenty-four hours,
I just had to get up to Killington Peak to check it out.
The mountain has been calling to me,
almost mocking me,
that she has been filling up with snow and I am down here,
sitting at my breakfast table just watching her.
So today, I took a journey to find some fresh April snow in which to make some turns. 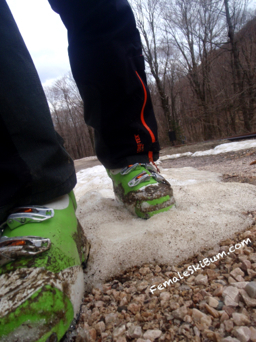 Not knowing what to expect, I started off with my skis on my pack and my Garmont Helix set to walk mode. Except for the fact that the random snow showers had confused me into layering for mid-winter conditions underneath my Mammut Eiger Extreme Mittegelli Shell & Pants, I was doing okay. 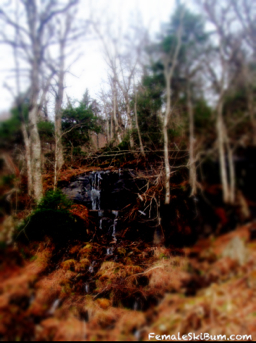 As the initial access trail turned to from a steady stroll to approximately a thirty degree pitch in the canyon, waterfalls became the name of the game. To my left, to my right...and apparently directly under the rotting snow I was hiking on. Well, at least we now know that the snow is about mid-thigh deep on climbing out of the canyon - and that it should ski pretty nicely in the upcoming week ;) 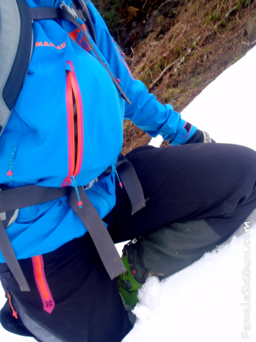 I made my way up through the soggy grass, easily kicking in every step.
Every year, as the snow melts,
all the trash littered by unappreciate guests of the resort comes exposed.
This year is no exception.
Alongside a fiddlehead taking it's first breathes
lies a pringles jar and a crushed beer can.
Why?
But we keep moving upward, until we crest up into the glades and there is finally enough consistent snow coverage to put my skis on. 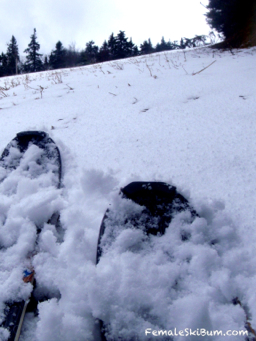 Definitely enough snow on which to skin...but would it be safe enough to ski?
The trail I had chosen for my ascent turned out to be
- by far -
the best of the three options, but nothing looked really "skiable."
At least, not for someone traveling solo.
I always think it would be much nicer to drag myself down the mountain with someone to help me and tell me how stupid I was for trying to ski three inches of spring powder atop nothing but wet grass and rocks. 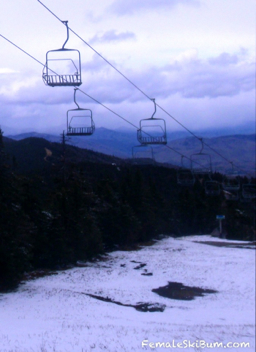 Eventually, I reach the highest point from which skiing would be possible today. Everything further up looked absolutely gorgeous -
but completely unskiable due to the rocky base.
We would need way more than double the snow we had to make it skiable.
But you know what?
How often do we get to enjoy the beauty of snow in April?
So I stashed my skis and poles in the woods and made the final push for the summit. 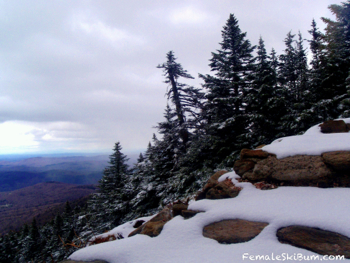 Yeah, I am pretty confident that I made the right choice. 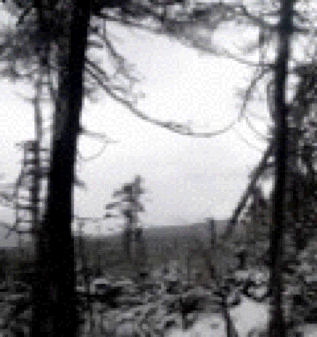 It was quickly evident that no one had been up this way in quite some time.
Only three days after the corporation had ceased to opereate the lifts and
already this place was feeling like a ghost town.
Perfect :) 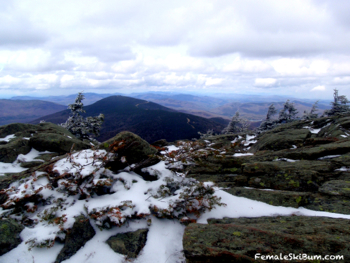 With snow having drifted in between the boulders on the summit, the view was stellar! Crystal clear all the way around, the mountains below working on their transition from the muddy browns of early spring toward the vibrant greens of late.
Vermont is becoming the Green Mountains once again. 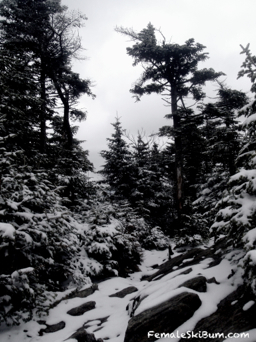 Beginning the descent back toward where I had hidden my ski gear,
I was reminded just how stunning just a few inches of snow can be
when they grace rocks and trees.
No mud up here,
not yet anyways,
just that cold, refreshing feeling of winter. 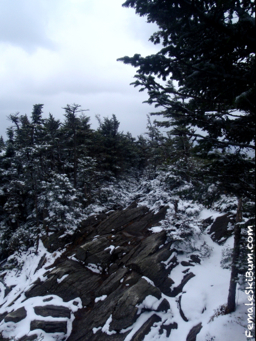 But now it was time to ski!

One at a time, I went through the motions of prepping for the descent.
I took my skins off, stuck them onto my cheaters and
stuffed them into the wet section of my pack.
Finally realizing that it was actually chilly up here,
I threw my synthetic insulation over my shell just to keep me warm while
I had a few sips of water...
buckled my boots down...
clicked into my bindings... 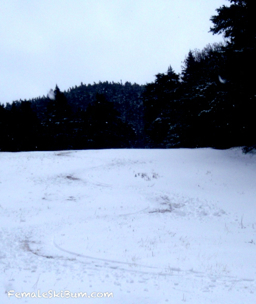 And then I skied.
Down one hundred percent natural snow that had only just recently partially recovered the trail that was muddy grass only a day or two ago.
No one had ventured up here.
There were no tracks to be found, save one sole turkey about half way down.
This was my trail, my snow, my dream...
and it was glorious!

After one turn I knew this would be one of those runs that live in your memory forever.
Perfect spring snow, without a hint of stickiness.
The kind of snow that makes you feel light,
light enough to float away
on three inches of fresh April snow. 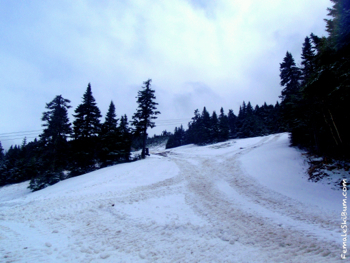 After more than my fair share of hoots and hollars,
the skis were back on my pack as I practically floated across the face of the mountain.
There was nothing holding me back now.
Just a super big grin that was barely contained by the side of my face
I had skied fresh pow in April.
AGAIN.
It was over to Superstar, where we'd all been skiing for what feels like the past month. Back to Superstar, where spring bumps were slowly merging with the trail beneath them as they too are covered with fresh snow. To Superstar, where we will ski laps until there ain't no more snow. 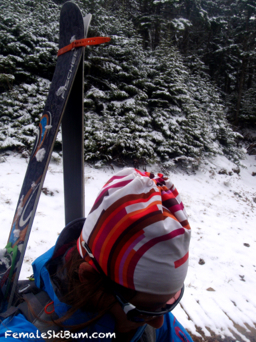 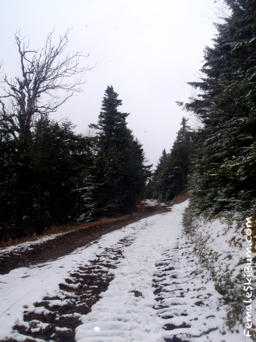 May You Find the Spirit of the Mountains Within You,
FemaleSkiBum
Earn You Turns Killington POWDER Skiing Skinning SNOW Spring Vermont Winter