We ski Killington everyday.
But sometimes, everyone needs a break.
From skiing.
From home.
From the real world. 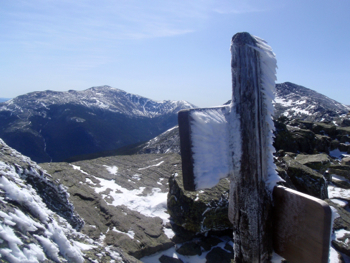 We loaded up the car and returned to the
Presidential Range of the White Mountain National Forest.
But this time...
we were leaving the skis at home.
To summit a mountain that we had left unascended for just such an occassion:
Mt. Madison 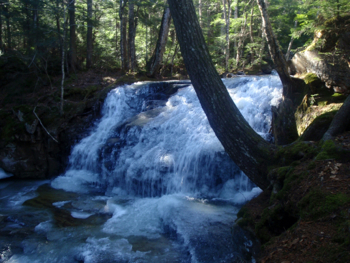 This trip was supposed to be just a simple ascent, but after checking in with our new friend Peg at the Pinkham Notch Visitor's Center, we knew it would be otherwise. Enough snow had fallen the night before to make the difference between slippery ice and dead leaves barely detectable. Combined with early morning reports of 50mph sustained winds on the summit, this was going to be more of an adventure than we had planned.
Now that's my kind of hike! 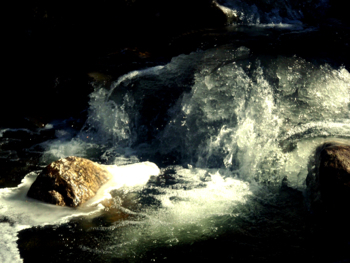 Never ones to take the path more traveled, we set off up the Brookside Trail in hopes of checking out some springtime waterfalls :) Just our luck, the entire trail ran parallel to the aforementioned brook and we grinned as we saw the shorelines refreezing from the current cold spell.
The ice was growing
reforming
strengthening
as winter attempts to make a late comeback here in New England 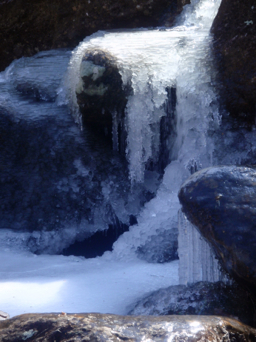 Way below treeline, the trail was a combination of slick frozen puddles and ice sculptures seemingly made by the Doozers to feed the Fraggles. Which is why I let the boyfriend lead - let him slip on the ice so Vespi & I can walk around it!
Good teamwork, Hunny! 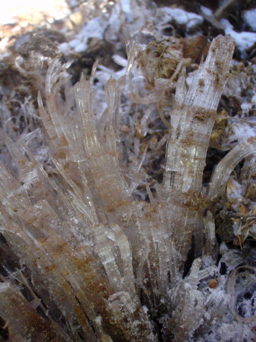 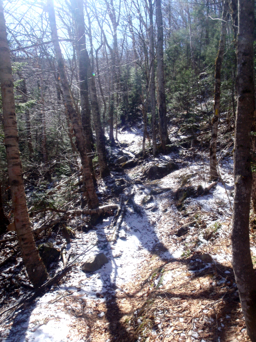 It was onward and upward, one foot cautiously after the other as we made our way up the trail. There were a few great river crossings...made even more so by Vespi's complete inability to determine the thickness of river ice.
Below freezing temps and a wet dog do not mix.
I love her, but sometimes dogs just don't get things.
and for some reason,
Vespi just doesn't get staying dry during icy river crossings. 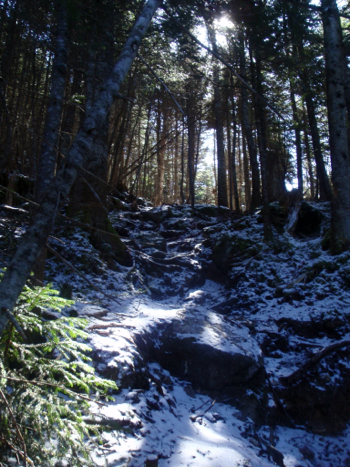 Pretty soon
(in reality, it was like 2 hours later)
we could see a faint light at the end of the tunnel.
A thin layer of small evergreen trees foretold the arrival of the
Alpine Zone
and we could see King's Ravine if we stood on our tippy toes.
We were almost to the summit! 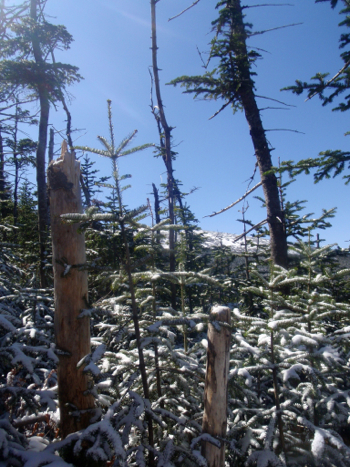 Yeah Right!
It felt like another mile of bouldering across snow dusted ice and loose lichen rocks before we reached the top. We had chosen mountaineering boots because of the cold temps and the season, but I felt like such a frankenstein as I teeter tottered on the rocks. I wanted my fine fingers. i wanted to be able to grab the rocks.
But instead, I just kept looking up at the view and then back at my footwork. 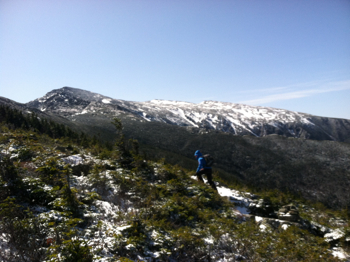 For Vespi,
it was like puppy heaven.
there were so many different ways to go, so many rocks to hop.
the alpine plants, so vivid and luscious only a week ago, had shriveled back up in he cold. Even with the lack of snow, the bitter winds reminded us just how brutal winters can be in New England. But hey - at least the wind never knocked me over! 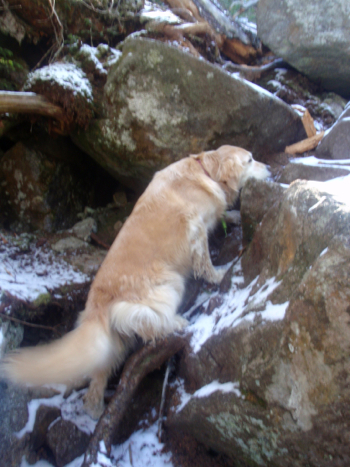 And then we saw it
the summit!
or was it the false summit?
I never believe I'm at the top until I am at the top.
too many broken hearts :) 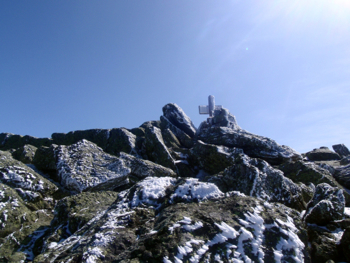 But after only one false summit, we had made it!
A little more than four hours after starting out from Appalachia, we were standing on top of our world, looking down at logging towns and wild ravines. We are blessed with such beauty - a 360 degree view of all that lay around us...and barely a cloud in the sky. 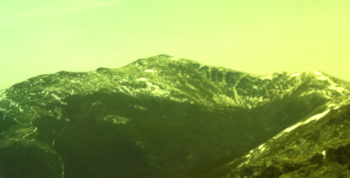 We settled in behind a boulder to block the wind and pulled out our alpine lunch of Vermont Smoke & Cure Summer Sausage and Maple Smoked Cheddar from Cabot.
And from the here, we could look across to the backside of Mt. Washington and
wonder how Tuckerman Ravine was skiing today :)
Hopefully, we'll be up there one more time this winter. 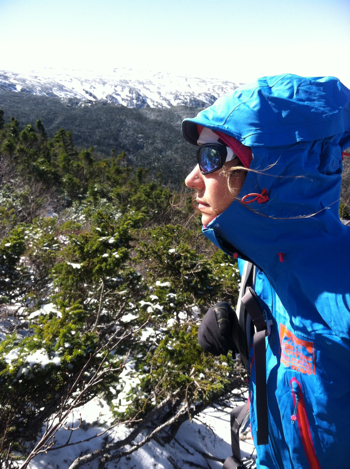 But don't think that it's all easy because you've made it to the top.
Instead of throwing our skis on and schussing to the bottom, we still had a few hour of hiking ahead of us.
And not the easy kind.
Try toe to heel walking down a frozen monorail through alpine trees.
Oh yeah - and if you slip, you are sliding a long ways to the bottom. 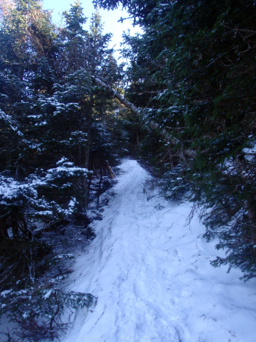 Hiking down Valley Way, we knew we had made the right choice on our loop. The snow dusted trees were simply gorgeous in the afternoon sun as we cautiously made our way down.
Except for Vespi, of course, who simply couldn't understand why we weren't simply running down. Maybe if we had brought trail crampons instead of just yaktrax... 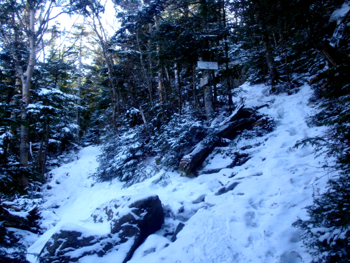 My knees really began to speak to me as we descended...but in a rare chivalrous moment, the BF shared one of his trekking poles with me and my knees screamed in relief! It's been only two years since the I caught a tip caught on a 2" sapling and my ACL was definitely reminding me today! 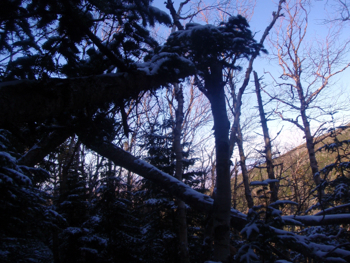 We made one more runoff stream crossing...
and all of a sudden the snow had vanished.
It was a rude awakening, this return to twig season...
but hey, at least we had snow at the top of the mountain, right? 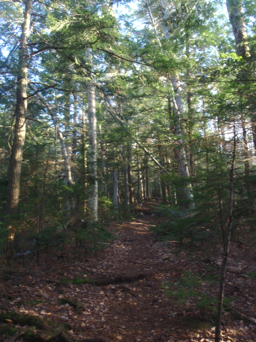 But never fear, because the White Mountains always saves the best surprises for last...
We woke up Wednesday morning to 3-4 inches of beautiful white stuff!! 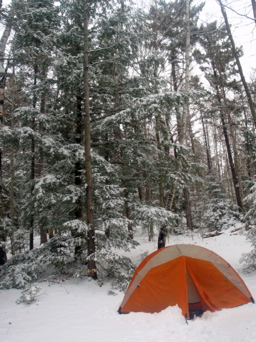 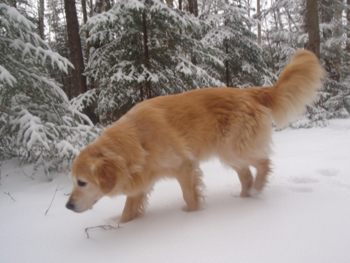 May You Find the Spirit of the Mountains Within You,
FemaleSkiBum & Vespoli