on September 03, 2011
The mountain is flush with stories of tragedy, of heartbreak, of renewal and near missses. There are so many of us in the surrounding area, each of us with our own stories to tell, some more heart wrenching than others, yet each and every single one represents the experiences of a natural disaster. We are all Vermonters and we are all different threads of the same story woven together. These are two. 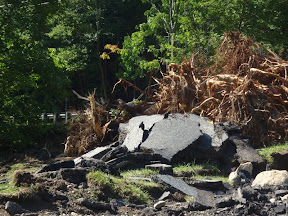 Got woken up from a deep sleep this morning so that I could escort the second round of American Red Cross workers around to assess the damages to buildings within the town limits. To my great surprise, one of the workers was from Georgia - and his name is Ethan Allen Yep, Ethan Allen. He had never been this far north before, prefers the flat farmlands of Georgia and has never seen snow. But he knew the story of one of Vermont's greatest legends by heart. 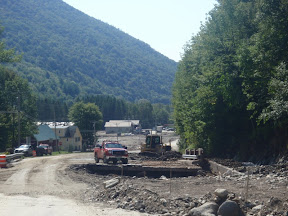 How did a Georgia boy end up know about the Green Mountain Boys and the surrender of Fort Ticonderoga? Apparently, after the Revolutionary War, Ethan Allen's brother moved to Georgia and started a family. The Ethan Allen I met today was a direct descendant of this brother. For the first time in his life, he was associated with a great Revolutionary War hero, rather than an expensive furniture company :). He felt good. 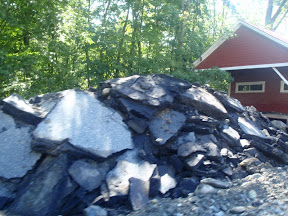 After I left the bureaucratic finaglings of the Red Cross, I pedaled up to the Killington Elementary School for lunch (there was turkey dinner with all the trimmings for those working hard in the command center). Over hamburgers, coleslaw and fresh greens, I spoke with an older resident of Killington. She was watching her ten-year-old grandson, who must have been running sround somewhere because I never saw him, and was wondering if the bus to Rutland was indeed running. 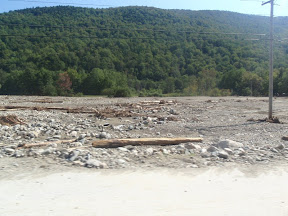 She explained to me that everything with her house was fine, but when the rain stopped on Sunday afternoon her son had called her from out of town to check on his house on River Road. At 3 o'clock on Sunday afternoon. Three O'Clock!! He was on vacation and wanted his mom to check on his house and three car garage. So she got in her car - at three o'clock in the afternoon - and headed down Route 4 toward the Church. When she saw the rapids raging across the road, she started to shake. I could barely hold the steering wheel, she explained as she turned away from the water as fast as she could. 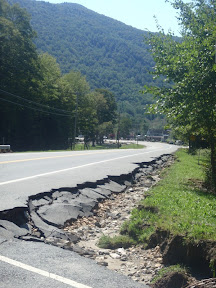 Not understanding what was really happening, she called her son. Try going down Route 100, he suggested, get to River Road that way. She was shaking her head in disbelief as she told me she drove toward 100. The woman explained that she wasn't really sure what to do, she was frightened but nothing was really making sense. Thankfully, someone had closed Route 100 North. With a sigh of relief, she told her son the road was closed so she couldn't possibly check on the house. I was lucky, she sighed.

To help the Killington Region Recover, please go to IrenesIslands.com to make a donation or to DiscoverKillington.com to book your vacation. Thanks :)