Running Around in Circles

on July 30, 2011
I felt trapped. Since I had some errands to do in town, I packed up my new Vibram Five Fingers, my grocery bags and headed into Rutland. I no time at all, I was completely drenched in sweat - and I mean SOAKED! But I just kept running around in circles; Pine Hill has no real "destinations," just miles and miles of highly maintained mountain biking trails. It actually became a little distressing, because although I do enjoy the adventure itself, today's run felt more like a treadmill than anything I have done in a while. So I focused on my stride and breaking in my new foot coverings instead. 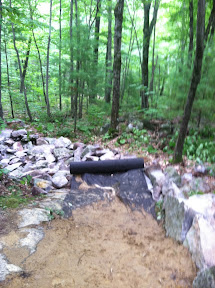 I have to say that it is really wierd running at Pine Hill Park because of the specificity of its trail system. The bridges are designed to bounce with the bike as you cross them, which made me feel like I was floating around on a ship getting tossed in the waves. Not a negative feelings, just a very different experience from the solid ground of the mountain.

Today was also an exercise in stretching my femur from my hip socket. Since the trails are technically easy to run - almost all the rocks and roots have been removed so it's almost like road running on meandering dirt - I was able to really focus on rotating my femur bone in toward the center and then pushing the bonehead out of the socket. This is similar to what you would do in mountain pose, I was just taking that into my running. And it is an AMAZING feeling. By the time I was done with my run, I felt almost as if I had gone through my hip opening sequence in yoga. I am getting very addicted to the freedom of loose hips!! 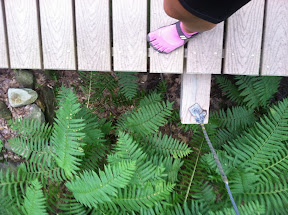 As a skier, I believe that loose hips can benefit us in soooo many ways, not the least of which being injury prevention and increased recovery from potential wipeouts. Imagine catchng your edge where one ski keeps going in the opposite directioof your body. A tight hipped skier might scream in pain, pull their ACL or even groin muscle trying to make everything work. Now imagine you are flexible enough to allow your femur some movement within the socket. That same injury would not happen, because your body would embrace the stretch and have the strength to pull the femur back into place - NO injury.