on July 28, 2011
I've been out of town for a few days, so I just had to get up to Killington Peak and check out the Peak Lodge Deconstruction. But, because of the hold on permits everything is now happening at once! I said hi to Lacombe at K1, who encouraged me to stay away from the his project because today was the trickiest part - Winching the huge snowmaking pipes up Cascade! 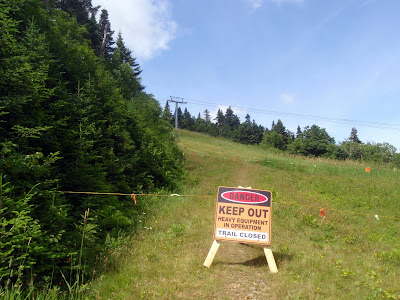 So Trail E was rerouted up Escapade, which I honestly have never walked up in the summertime (done it in winter though!) and was treated to a completely different array of wildflowers! 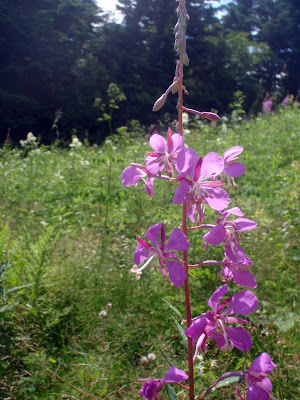 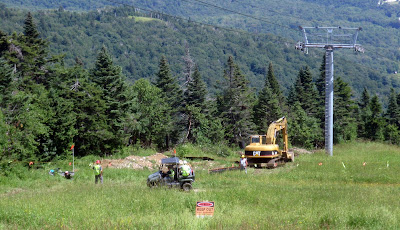 But this is what I really came for - to check out the deconstruction of the Peak Lodge, which finally began on Monday. I was guessing that by today - Thursday - they would have had one wall down... 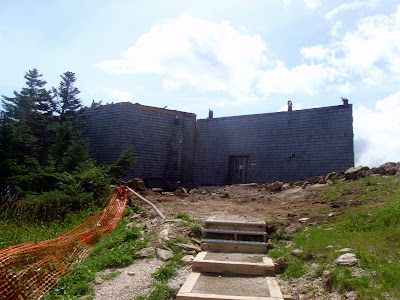 But it looked so freaky as I came up the Stairway to Heaven. You can see where the skier's left wall just stops and doesn't actually connect to anything... 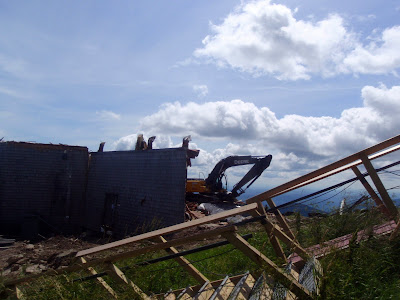 ...because there was nothing there! The Casella guy that I spoke with said he was amazed with how fast and easy the building came down. While it was forty years old, he figured that each year was more like 5 years in wear and tear from exposure. There was one corner that came down at whole lot easier than all the others though! 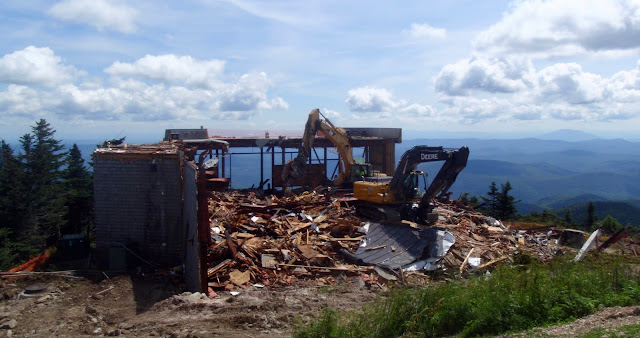 Remembering that both the Green Mountain Club and Pres Smith's original boone of peak construction was porcupines, I was delighted to hear that there was a big 30 pounder residing under the Peak Lodge. Of course, he has now been displaced. 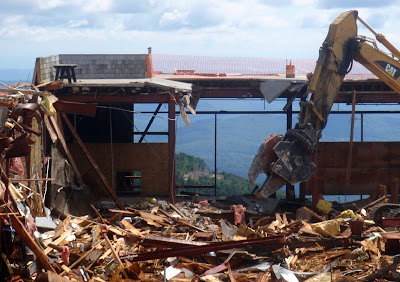 The dogs and I sat up top for a while and watched the Catepillar's do their work. I found it very interesting that instead of the entire beam separating, only part of the beam would detach - they would easily break at the disintegrated weak point. I bet you're glad it's coming down now!! 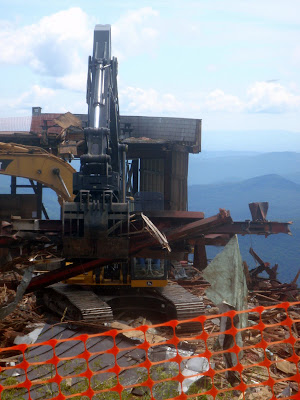 Then the other guy would gather up the metal and pile them up, getting ready for the big Casella dump trucks that were amazingly making it up the Great Eastern Work Road. Killington had a groomer watching the truck wheels spin on the loose gravel work road and then would fix those spots right up with the excavator for the next load. 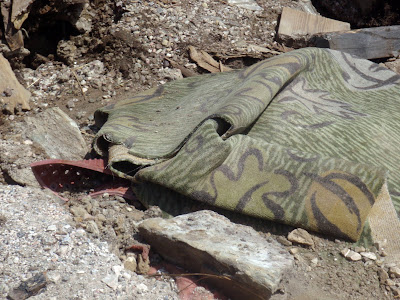 A bit of carpet lying around :) 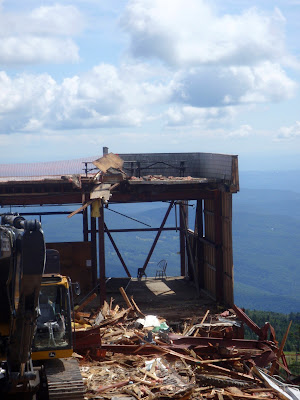 Hey - anybody want to go have lunch up ther on the picnic tables? The workers all thought they were pretty funny by having left them up there :). Actually, all the workers were having a really great time and we excited to be part of this historical event. 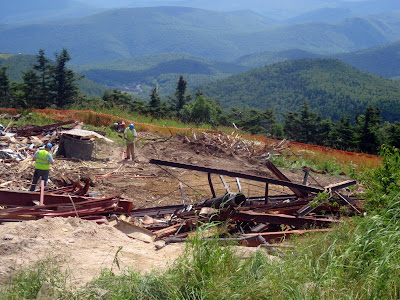 Sorting metal, steel and wood in order to make a little bit of money from the deconstruction.... 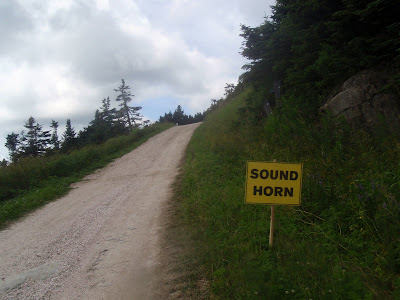 "Sound Horn" signs are EVERYWHERE! Which is good, I guess, unless you want to get run over by a 30 yard roll off dumpster on its way down the mountain filled with crap...

For all you Star Wars Fans: One of the last few looks at the Blast Shield Generator on the Forest of Endor :) 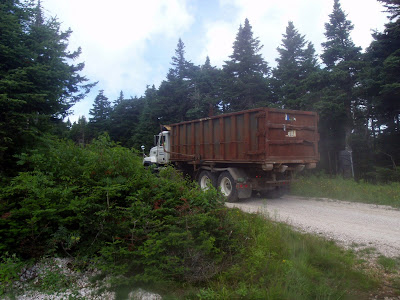 Big 30 yard roll-off dumpster getting driven up the mountain. Seriously, this might be the most impressive part of the whole deconstruction. 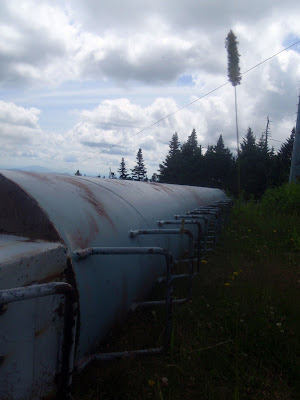 We descended via South Ridge order to check out the removal of the ascending towers. They are moving downhill from the get-off and it looked like they were at about tower 23 or so. Looks like they just chopped them off at the bottom and plopped them over. Timber!

Like there wasn't enough construction going on today, Rosey and Corey have been getting ready for this weekend's downhill mountain bike race. I am hoping they remove all this white taping before winter comes - but it looks great in the summer! Wierd though that the are really buffing out the trail - I thought races were supposed to be technical? 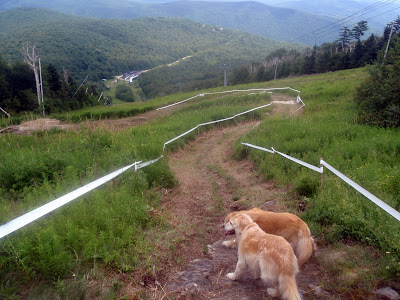 One last parting shot as we reached the bottom of K1 :) 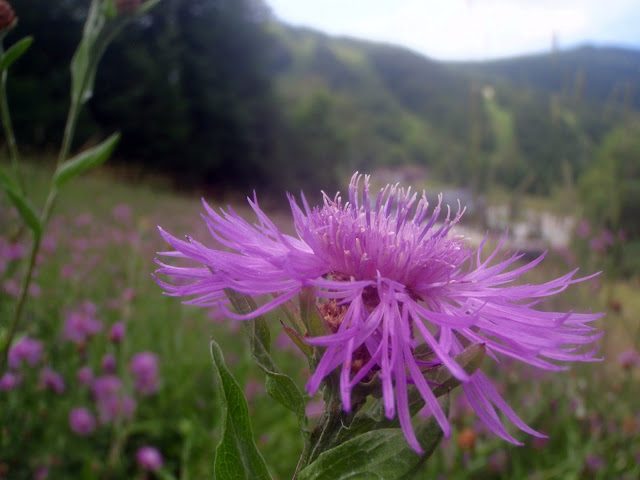 See you on the Mountain,
FemaleSkiBum :)