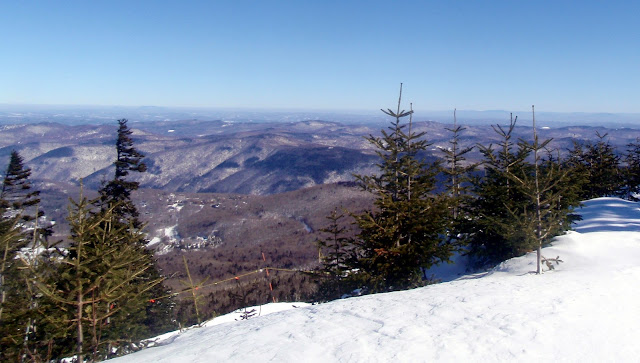 Wow! What a beautiful day on the hill! Started out with thinly groomed,cold snow in the Glaedsand the Canyon, then moved on to Skye Peak via Upper Skyewalker with my Hopefuls. What a great trail, blocked from the wind by alpine zone like evergreens and beautiful vista from a unique angle. Thanks to the curiosity of a seven year old, who will be eight on Saturday, I got the pleasure of experiencing a trail that I had for some reason, failed to experience thus far.
But the afternoon reigned supreme! As we exited the coaches' locker room, the entire Hopeful Program was working on this jump in front of the club. you had variation from straight to alley oops to even a few attempts at the 360, so close, yet just put of reach today. It was a great impromptu "rail jam" session for the parents :) but then it was off to the real terrain park, where we sessioned boxes for TWO HOURS! I couldn't believe that 5 to 8 year olds would be willing to hike for boxes for that long, but they did! A ride on, a rainbow then a tiny yet long jump on - by the end of the two hours, no kid was left behind! They were doing multiple variations from straight runs, to grabbing safety to beginnings of sliding 180 on the box :) so awesome to see these little guys making such awesome moves!!
Seriously though, the blazing sun in the bluebird sky made from beautiful weather - for ice climbing, that is! With the snow hard as a rock, Aaron & I are meeting up with some friends to scale some sweet ice tomorrow :). Hopefully there will be sun to bask in, because my goggle tan is not yet disgintive enough!
Hopefuls Skiing